For other uses, see Titan (disambiguation).

An esper, which was asleep deep within a cave somewhere in Mysidia, which embraces the power of Gaia. In the land of Mysidia where this towering giant is from, it is believed that any rumbling of the ground is the Titan tossing in its sleep. Though it has a calm side which seems to represent Gaia itself, once it is angered it rampages until it finally calms down. Its anger is said to be strong enough to crush any human, animal, or even monster around.

Titan can be obtained after you defeat him in Cave of the Titan. To unlock the dungeon, finish the following prerequisite: 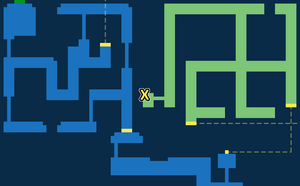 Once you have leveled Titan to the maximum level (30), an additional dungeon in Cave of the Titan, Trial of the Giant, will appear. Defeat his stronger version and Titan will be upgraded to 2-star

Once you have leveled him to Level 40, New Trial of the Giant will appear with an even more powerful version of Titan. Defeat him and Titan will be upgraded to 3-star

His resistance to petrify is +100% when he reaches 3-star