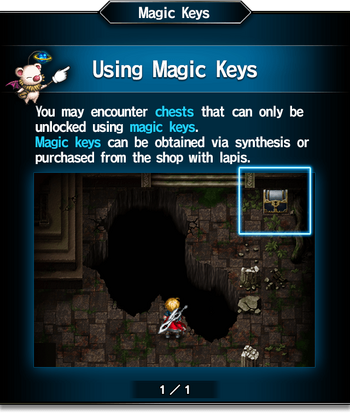 Silver chests, or locked chests, can be unlocked with a Magic Key, crafted from 3 Fine Alcryst and 3 Screamroot. You may also purchase a magic key bundle using Lapis. Fine Alcryst can be obtained with a small chance while crafting any ability. Screamroot is one of the two materials dropped from a very rare monster, Minituar, found randomly during explorations. Either materials can also be obtained as a reward from clearing certain trophies.

The key is used up upon unlock, so you will have to craft one for each chest. Due to limited amount of materials available, Magic Key is considered a limited resource and should be used with caution.

Note: The recipe for Osafune can be obtained in a chest in the Wind Shrine - Exploration.

Note: Green Beret can also be purchased in Felicitas Town for 500 gil.

Note: Wizard's Robe can also be purchased in Felicitas Town for 1000 gil.

Note: Brigandine can also be purchased in Underworld Gaberada for 1200 gil.

Land of the Crystals

The Fortress City of Berga