King Mog or Mog Minister will exchange various rewards for special currency within the event period. You can obtain this currency by defeating enemies inside the event vortex dungeon. Using the following bonus units will increase the amount of currency received in the vortex dungeon. The bonus is cumulative so you can use as many as you can, including one from a friend companion.

The four lights of hope -- Orience, the land of crystals, and of the saviors "Agito".

Many a day has passed in that distant world, and it is now Gla. XXII, 842 RG. Having been charged with defeating a new weapon developed by the Milites Empire, Class Zero, the young warriors of the Vermillion Bird, head to the facility where this magitek armor is being produced.

As the fighting breaks out, though they originally saw the Militesi Empire as an invading nation, the warriors against whom they fought battled with stalwart conviction. Class Zero, as wise and powerful as they were, saw themselves being called monsters by these imperial warriors who fought for nothing but their country.

How might Rain and his friends think of these differing ways of life. All that is sure is that they must do all they can to protect this moment in history.

You can find King Mog or Mog Minister in the Farplane to exchange event currencies with time-limited items. 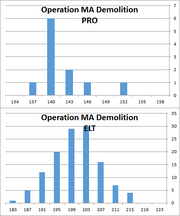 Although the above table is based on the average of the lowest and highest drop quantities, such would only be valid if the non-guaranteed drops had exactly a 50 percent chance of occurring; based on samples collected by CodeHydro (right), such does not appear to be the case.
Normal ELT runs (n = 124) averaged at 200.3 and normal PRO runs (n = 11) averaged at 141.9. Excluded ELT runs (n = 8) had 3 Nimbus and 6 Golden Bombs (one run had both). No rare encounters in PRO samples.