King Mog will exchange various rewards for Candy within the event period. You can obtain Candy by defeating enemies inside the event dungeon. Having more of the new Secret of Mana units on your party will give bonus to the amount of Candy earned.

Using the new Secret of Mana units will increase the amount of Candy received in the stages, the bonus is cumulative so you can use as many as you can, including a friend unit.

You can find King Mog in the Farplane to purchase time-limited event items with candy until claim period is over. 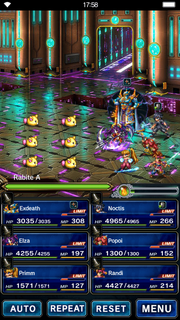 Make sure to trade all event currency before the claim period is over! King Mog will no longer sell event items once it does.