View source
Carbuncle refers to an esper. For an enemy, visit Carbuncle (Monster).

An esper which resides in Carbuncle Grove in western Olderion. It has soft, jade fur, and sparkling red gems on its cheeks. Though much smaller than other espers, the power it holds within its tiny body is more than deserving of its classification. The "ruby light" it unleashes from the gems on its cheeks creates an invisible barrier said to be able to reflect magic.

Carbuncle can be obtained after you defeat him in Carbuncle Grove. To unlock the dungeon, finish the following prerequisite: 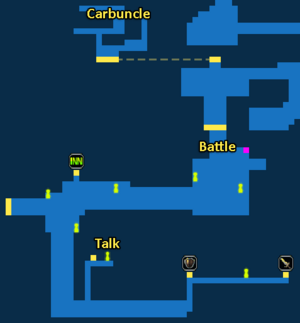 Once you have leveled him to the maximum level (30), an additional dungeon in Carbuncle Grove, Trial of the Ruby, will appear. Defeat his stronger version and Carbuncle will be upgraded to 2-star

Once you have leveled it to Level 40, New Trial of the Ruby will appear with an even more powerful version of Carbuncle. Defeat it and Carbuncle will be upgraded to 3-star

Its resistance to disease is +100% when it reaches 3-star